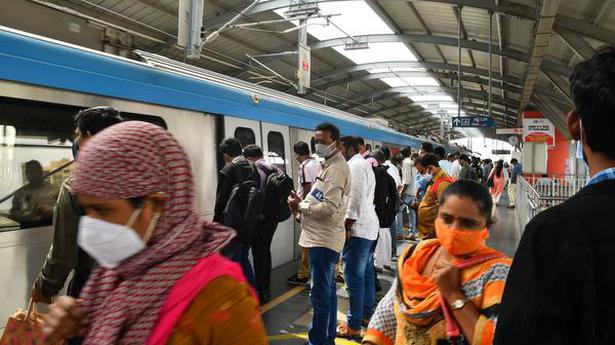 Hyderabad Metro Rail (HMR) and L&T Metro Rail-Hyderabad (L & TMRH) have announced the start of the metro railway work on the morning and hour from November 10. Railways will start at 6 a.m. from Raidurg, Nagole, Miyapur, LB Nagar, MGBS and JBS across these three routes instead of the usual 7 am

Increases in morning surgery should be between 10-15 minutes from time to time, depending on the number of people assisted, the number of trains increases gradually, said HMR MD NVS Reddy. The decision was taken following the Minister of IT, Municipal Administration and Industries KT Rama Rao ordering metro rail officials to consider starting the project as soon as possible after requesting passengers on his Twitter page.

However, final services will continue at 10.15 pm, meaning that the last train will depart at this time of departure to reach its destination around 11.15 pm Frequency of train trains from 7am until the final operations will be the same. in Corridor One or Red Line – Miyapur to LB Nagar trains depart at 5-8 minutes and in Blue Line or Corridor Two – Nagole-Raidurg.

Green Line or Corridor Three – Jubilee Bus Station (JBS) – Mahatma Gandhi Bus Station (MGBS) in Imlibun will have about 10 minutes by train between 7am and 10.15 pm considering the journey. The closure of COVID-19 from March 2020 and the banning of operations on the first and second waves until the last few months have affected traffic flow.

But, there has been a slow pace in recent years with many financial services and offices opening up with about 2.5 lakh people walking daily across three corridors within a week, a government spokesman said.