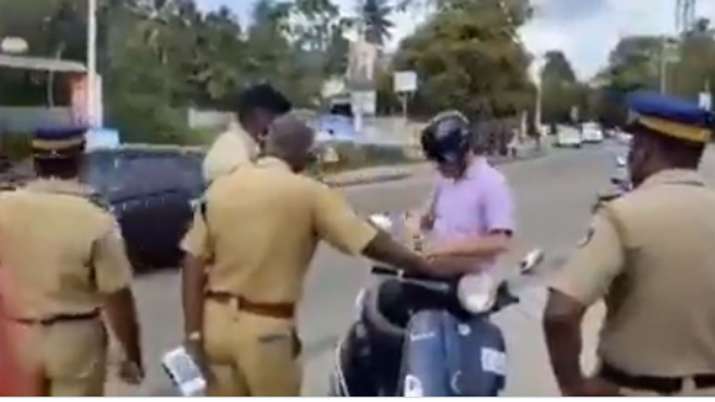 Thiruvananthapuram: The Kerala Police Force is said to have forced a visitor to release a bottle of beer he had bought at a government liquor store to celebrate the New Year. A video of the incident took place on social media. In the video, a foreigner is seen pouring a bottle of beer in front of a police team in Kovalam, a popular tourist destination in southern Kerala, on Friday.

The government has suspended the officer

In light of the matter, the government on Saturday suspended a police officer who allegedly forced a visitor to stop drinking. According to government sources, Prime Minister Pinarayi Vijayan has requested a report from the state police chief on the matter. State Tourism Minister PA Mohammad Riyas described the incident as “unfortunate” and said such a move undermined the government’s efforts to revive the state of tourism in the state would not be tolerated.

This happened when the visitor was riding two wheels back after buying beer at a Bevco bar near Vellar. The minister said the police team investigating the visitor stopped the visitor and interrogated him. Alcohol bottles were found. When asked to show the bill, the visitor told him that he had forgotten to take the money from Bevco. However, he insisted that he could show the bill. At this point, police allegedly forced him to pull out a bottle.

‘Goa is more friendly than Kerala’
Kerala The man, who has lived in Mumbai for the past four years, told reporters he had no complaints from the police because they were his friends, but expressed displeasure with the police for disrupting the New Year’s celebration. The man said Goa is more tourist friendly than Kerala. In response, the state tourism minister said, “It is a tragic event.”

‘Such experiments will not be tolerated’
The Minister of Tourism has said that the affected department will take action against officials who are acting in violation of the country’s interests. Riyas said efforts are being made to attract more tourists to Kerala. He said if any police officer wanted to disrupt the government’s activities, it would not be allowed. (Language)

Boxing Day Test between India and SA to be played without spectators – Latest...

Former Kiwi cricket expert Chris Cairns, who returned after winning a battle to his...

We will be developing weapons in Guam and Australia to confirm its interest in...

Metaverse will be the future of Facebook! How will the lives of ordinary...